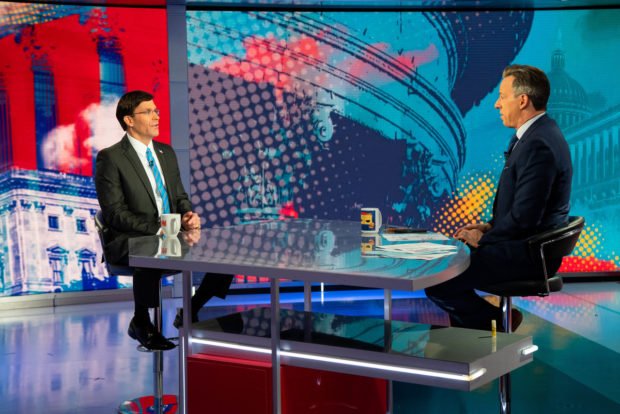 “We had information that there was going to be an attack within a matter of days, that would be broad in scale, in other words more than one country, and that it would be bigger that previous attacks, likely going to take us into open hostilities with Iran,” Esper said, while speaking today with Margaret Brennan on CBS’s “Face the Nation” news program.

The United States is safer today than we were just a few short weeks ago.” – Defense Secretary Dr. Mark T. Esper

That attack, Esper said, was being orchestrated by Soleimani, who was killed in Iraq Jan. 3 by a United States-launched airstrike. Soleimani was head of the Islamic Revolutionary Guard Corps’ Quds Force, which is designated by the U.S. as a terrorist organization.

“He was the one who has led the attacks against America for 20 years now,” Esper said. “So we had every expectation to believe that this would happen.”

A “very senior” member of the intelligence community, Esper said, has said the risks associated with doing nothing to prevent the attack was greater than the risk of taking action. “That was compelling for me,” he said.

The secretary said intelligence was briefed to lawmakers who are members of the “Gang of Eight.” That bipartisan group includes members of both the Senate and the House. While Esper himself didn’t sit in on the briefing, he said he spoke to one of the intelligence briefers who was in on the meeting.

“What the briefer said to me, coming out of that meeting, was his assessment that most if not all of the members thought that the intelligence was persuasive,” Esper said. He also said that members of the group felt the intelligence should not be released to the broader members of Congress.

While speaking with Jake Tapper on CNN’s “State of the Union” news program, Esper said he thinks the threat of direct action against the United States by Iran has diminished, but that Iranian “malign behavior” is likely to continue.

Esper characterized that normalcy as meaning no nuclear weapons program, no long-range ballistic missiles, no hostage-taking and no support to proxy groups.

“The United States is safer today than we were just a few short weeks ago,” Esper said. “We eliminated the world’s foremost terrorist, Qassem Soleimani, who had the blood of hundreds of American service members on his hands. Secondly, we restored deterrence with Iran and we did so without American casualties. And third, we reassured our friends and allies in the region that the United States will stand up and defend our interests.”