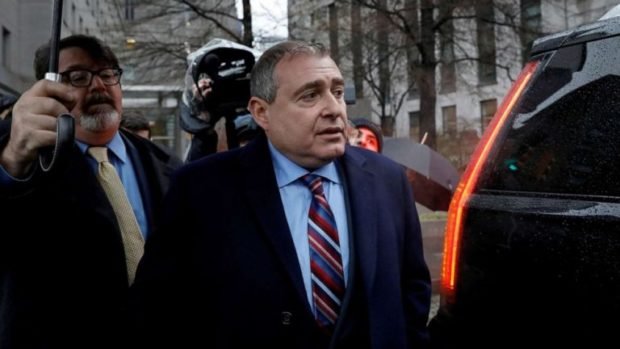 Lev Parnas said few words during an April 30, 2018 dinner with President Trump and a small group of associates, according to an audio recording of the event, which Parnas’s lawyer provided the media on Saturday.

But what Parnas did say in the 84-minute recording could shed light on why the Soviet-born businessman may have been interested in the removal of Marie Yovanovitch as U.S. ambassador to Ukraine. His remarks also appear to conflict with his claims in interviews last week that his Ukraine-related efforts were merely intended to help Trump and his lawyer, Rudy Giuliani.

Parnas made two main points during the event, in which attendees discussed golf, China, the border wall and other topics of the day: he and his partner, Igor Fruman, were in the process of purchasing a Ukrainian energy company, and Yovanovitch was bad-mouthing Trump and needed to be removed from her post in Kyiv.

Parnas’s unprompted remarks about Yovanovitch are the first known evidence of Trump being told derogatory information about the career diplomat. His comments also raises the question of why Parnas was interested in getting rid of her.

Prosecutors in New York appear interested in the same question.

A federal grand jury in New York indicted Parnas and Fruman on Oct. 10 on charges that they made illegal campaign contributions to Republican lawmakers and political action committees. Prosecutors allege that the duo took part in the scheme in order to advance personal and business interests, as well as to force Yovanovitch’s removal as ambassador.

The indictment alleges that Parnas was operating on behalf of “one or more” Ukrainian officials to force Yovanovitch’s removal. Days after the dinner with Trump, Parnas met with then-Rep. Pete Sessions. After the meeting, Sessions wrote a letter to Sec. of State Mike Pompeo urging him to recall Yovanovitch.

Parnas contributed a maximum donation to Sessions’ campaign in June 2018. Prosecutors allege that Parnas pledged to raise another $20,000 for the Republican.

Trump eventually removed Yovanovitch from her post in Kyiv, but not until April 24, 2019. In the months leading up to the decision, Parnas and Fruman worked closely with Trump lawyer Rudy Giuliani to collect and disseminate derogatory information about Yovanovitch, much of it unverified. The also alleged that Joe Biden intervened to shut down investigation in Ukraine of Burisma Holdings, an energy company that had Hunter Biden as a director.

In the recording, Parnas is heard broaching the topic of Ukraine during a discussion about the oil and gas business, and Germany’s partnership with Russia on a pipeline.

“We’re in the process of purchasing an energy company in Ukraine right now, that should help cut off Russia’s…,” Parnas is heard saying in the tape.

Parnas said that Ukraine “loves” Trump and is dependent on U.S. support, especially in its ongoing fight with Russia. Parnas then shifted gears to Yovanovitch.

“The biggest problem there, I think, where we, where you, need to start is we gotta get rid of the ambassador,” Parnas is heard saying on the recording, which Parnas lawyer Joseph Bondy released on Saturday.