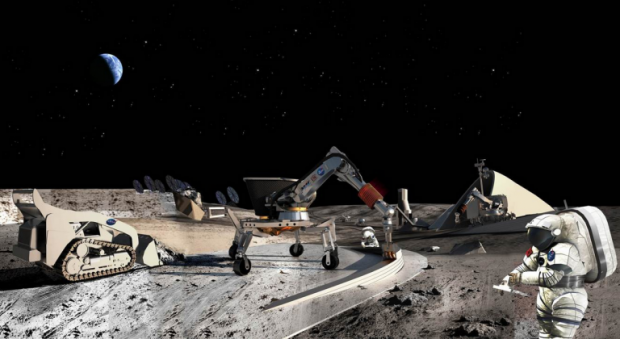 Sometimes the most consequential events are little understood—or even noticed—as they unfold. For instance, on July 14, 1789, the day that French revolutionaries stormed the Bastille, King Louis XVI wrote in his diary, “rien” (nothing). That’s how disconnected Louis was from the tide of history. And soon, of course, he was disconnected from his head.

In our era, on April 6, 2020, Americans were mostly focused on the impact of the coronavirus. And so another epic tidal event, President Trump’s signing of an Executive Order securing a better deal for space entrepreneurs, went little noticed.

Yet heralded or not, it’s a good thing that Trump signed it, because the 45th president has now done much to fulfill the destiny outlined by the 35th president, John F. Kennedy, who back in 1962 pledged that America would be “the world’s leading space-faring nation.”

Yes, back in the 1960s, it seemed inevitable that intrepid Americans, symbolized by the Kennedy-esque—but alas, fictional—Captain Kirk of Star Trek, would soon be zooming around the galaxy.

But whatever happened to the Star Trek vision of men, and women, boldly space-faring? Why, six decades later, do we have some 2200 satellites in orbit, mostly focused on terrestrial communication—and not much else, really, going on out there? A full answer would tick off all the fiscal, historical, and biological reasons why space has proved so daunting for humans, and yet the simplest short explanation is that there’s not, as of yet, much for people to do in the wild black yonder.

Most obviously, there’s no intelligent life to interact with. The Star Trek future included Vulcans to be friendly with, Klingons to fight with—even comely aliens to have sex with–but again, that’s all only imagination. In the here-and-now universe, which seems so empty, machines can seemingly do whatever tasks need to be done.

Still, there’s unlimited potential in space—and we have, after all, just scratched its surface. One of those potentialities is getting rich, or richer. For instance, the Moon holds vast deposits of Helium-3, which could be used to make low-temperature nuclear energy; the resulting electricity could then be used to manufacture goods on the moon, or perhaps it could be somehow transported back to earth. Moreover, a dozen nearby asteroids could someday be mined profitably for such elements as cobalt, iron, nickel, and platinum.

Here is where Trump’s new Executive Order is so directionally profound: The document puts the U.S. down firmly on the side of visionary high-tech capitalism: “Successful long-term exploration and scientific discovery of the Moon, Mars, and other celestial bodies will require partnership with commercial entities to recover and use resources, including water and certain minerals, in outer space.” In other words, the key to stimulating investment is robust property rights; companies aren’t going to invest the billions, or trillions, needed to harvest resources if they aren’t reasonably sure that they can protect their assets and thus make a profit.

Yet as Trump’s order notes, certain international agreements, such as the 1967 Outer Space Treaty, are written to undercut property rights; as the treaty declares, “The exploration and use of outer space, including the moon and other celestial bodies, shall be carried out for the benefit and in the interests of all countries, irrespective of their degree of economic or scientific development, and shall be the province of all mankind.” In other words, we are the world, we must share with the world—even if only one of us does all the work. (In a fit of absent-minded utopianism, the U.S. signed this agreement—indeed, it actively pushed for it.)

There’s also a 1979 Moon Agreement, which the U.S. has not signed, which is even more explicit about sharing astral proceeds with the rest of the world.

As Trump’s Executive Order explains, “Uncertainty regarding the right to recover and use space resources, including the extension of the right to commercial recovery and use of lunar resources . . . has discouraged some commercial entities from participating in this enterprise.” So now, happily, the U.S. is backing out of these dumb deals, in hopes of unleashing space-tycoons.

Indeed, Trump has been doing even more, albeit with almost no attention being paid. On May 5, Reuters scooped that the administration working on “Artemis Accords,” aimed at further clarifying property rights on the Moon; we are negotiating with friendly partners, such as Japan, the United Arab Emirates, and the European Union to establish interference-free “safety zones” where Moonrakers can do their enterprising thing.

We might observe that these Artemis Accords leave out China and Russia, to name just two possible discord-makers. And yet the president has the beginning of an answer to that, too: On December 20th, 2019,  Trump signed a national security bill officially establishing a U.S. Space Force.

So now we’re starting to see how outer space could get busy; if we have space miners and space profits, we’ll soon enough have space marauders, and so then also space defenders. And while much of this space-faring could be done by robots, it’s obvious that people, as well as their companies and countries, are going to get drawn into the action—be it peaceful and profitable, or wrathful and terrible.

And to think: This momentous future history got a Saturn V-level boost on April 6, 2020, a date which now lives in obscurity, but which will one day be remembered well.

James P. Pinkerton, a former White House domestic policy aide to Presidents Ronald Reagan and George H.W. Bush, has been a Fox News Contributor since 1996. He is also the editor of CureStrategy.org.

The views and opinions expressed in this commentary are those of the author and do not reflect the official position of the Daily Caller News Foundation or Conservative Daily News.