A fake President Donald Trump re-election campaign website is directing visitors to the Democratic Party’s digital fundraising arm, which in turn is asking them to donate money to the National Association for the Advancement of Colored People.

A website called LocalTrump2020.com is directing visitors to left-wing group ActBlue’s donation page, which is requesting visitors donate to the NAACP, according to a Daily Caller News Foundation analysis. The fake website notes in a small disclosure that it is in support of the Black Lives Matter movement. 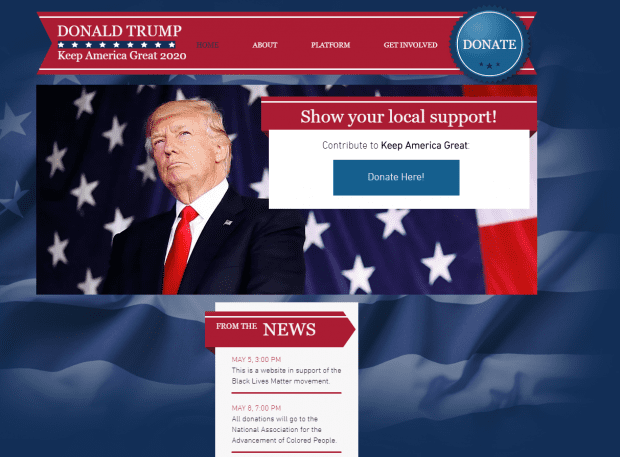 The “About” page on LocalTrump2020 notes that the website is not affiliated with Trump’s re-election campaign but tells visitors that their “help is greatly appreciated in your local community to keep our President of the United States in political power.” The website goes on to solicit donations for the NAACP. 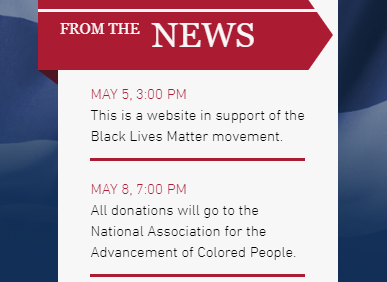 “We uphold traditional and conservative values. Your money will go entirely towards the National Association for the Advancement of Colored People. Donations of all size are important – we are all in this together! Be best! Support your LOCAL Trump Campaign Today!” the page notes.

The LocalTrump2020 landing page explains toward the bottom of the page that, “this is a website in support of the Black Lives Matter movement.” That qualifying information below a large blue button asking for donations, which sends visitors to ActBlue when pressed.

ActBlue’s website goes into greater detail about how visitors can donate to the NAACP, giving people the option to donate as much as $1,000.

“The NAACP is at the forefront of the movement to build political power and ensure the wellbeing of communities of color. Underscoring the advocacy of our 2,200 local units across the country, we empower our communities to make democracy work for them,” the group before suggesting “your donation to the NAACP helps further our mission.”

Neither the Trump campaign nor ActBlue have responded to the DCNF’s request for comment.

The GOP has a slight edge over the Democratic Party in cash on hand for the 2020 election at $187 million to $167 million, according to OpenSecrets.org.