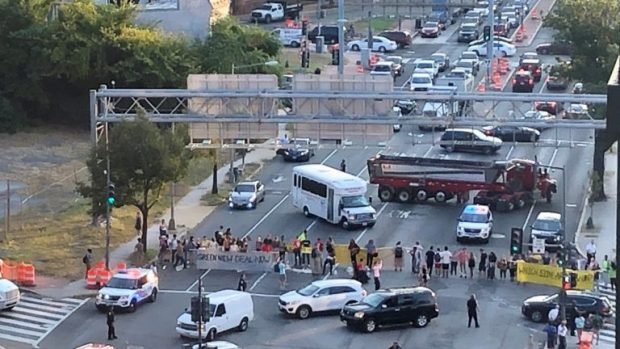 A radical climate activist group announced Friday it will hold a march and rally outside the Virginia home of Acting Secretary of Homeland Security Chad Wolf on Sunday in retaliation to the recent deployment of DHS officers to Portland.

“The Department of Homeland Security, under the leadership of Acting Secretary Chad Wolf, was deployed to Portland, Oregon last week,” the group, Shut Down DC, wrote in an email to its supporters Friday. “Since then, unidentified federal agents have violently attacked protesters and bystanders, including with chemical weapons, and kidnapped people in marked vans.”

Shut Down DC, which is a coalition of self-described “climate rebels,” also suggested in its email titled “Join us at Chad Wolf’s house” that there was “no guarantee that Chad Would would not use DHS to silence political opposition” in the event of a contested 2020 presidential election.

The group said it would be calling for Immigration and Customs Enforcement to be “abolished,” and for every person detained by Customs and Border Protection (CBP) to be freed during the march outside Wolf’s house.

“Join us in the streets,” the group said. “We’re not backing down, not now, not in November, and not while [black, indigenous and people of color] are under attack.”

DHS agents were deployed to Portland last week to help quell weeks of nightly protests that have gripped the city. The agency has faced widespread criticism after reports surfaced that CBP agents were detaining people in the city without cause.

Shut Down DC gained notoriety after organizing a traffic blockade in September while demanding action on a Green New Deal that brought sections of Washington D.C. to a standstill. Police arrested 26 climate change activists during the event.

Protesting outside the home of prominent politicians and government officials from both sides of the political aisle has been a tactic increasingly utilized by radical activists in recent months following the police-custody death of George Floyd in Minneapolis.

A group of protesters gathered outside of Senate Majority Leader Mitch McConnell’s home in Kentucky on Juneteenth protesting the shooting of Breonna Taylor, an unarmed black woman, in Louisville.

Kentucky Democratic Gov. Andy Beshear had to construct a fence outside the governor’s mansion after armed protesters crossed over barriers to stand on the front porch during a protest in May.

On Thursday, hundreds of protesters gathered outside the home of Chicago Democratic Mayor Lori Lightfoot demanding that the city’s police department be defunded. The protesters were also displeased with Lightfoot’s acquiescence to President Donald Trump’s plan to send federal agents to support ongoing investigations into violent crime in the city, the New York Post reported.

“Chicago Mayor Lori Lightfoot agreed to let feds into Chicago,” a Twitter user who was at the protest tweeted Thursday night. “So this is the scene outside her house tonight.”

Chicago Mayor Lori Lightfoot agreed to let feds into Chicago. So this is the scene outside her house tonight.

“Allen, wake the f**k up,” one protester yelled through a microphone during the protest.