Greece Needs To Expand Its Experiment With Supply-Side Economics 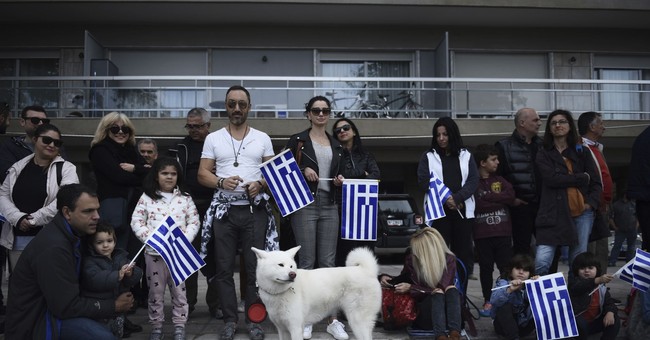 There’s a reason that Greece is almost synonymous with bad economic policy. The country has endured some terrible prime ministers, most recently Alexis Tsipras of the far-left Syriza Party.

Andreas Papandreou, however, wins the prize for doing the most damage. He dramatically expanded the burden of government spending in the 1980s (the opposite of what Reagan and Thatcher were doing that decade), thus setting the stage for Greece’s eventual fiscal collapse.

Policy makers in Athens are trying a bit of supply-side tax policy, at least for a limited group of people.

The U.K.-based Times has a report on Greece’s campaign to lure foreigners with low tax rates.

“The logic is very simple: we want pensioners to relocate here,” Athina Kalyva, the Greek head of tax policy at the finance ministry, said. “We have a beautiful country, a very good climate, so why not?” “We hope that pensioners benefiting from this attractive rate will spend most of their time in Greece,” Ms Kalyva told the Observer. Ultimately, the aim is to expand the country’s tax base, she added. “That would mean investing a bit — renting or buying a home.” …The proposal goes further than other countries, however, with the flat tax rate in Greece to apply to other sources of revenue as well as pensions, according to the draft law. “The 7 per cent flat rate will apply to whatever income a person might have, be that rents or dividends as well as pensions,” said Alex Patelis, chief economic adviser to Kyriakos Mitsotakis, the prime minister. “As a reformist government, we have to try to tick all the boxes to boost the economy and change growth models.”

Here are excerpts from a Reuters report.

Greece will offer financial incentives to encourage wealthy individuals to move their tax residence to the country, part of a package of tax relief measures… Greece’s conservative government is keen to attract investments to boost the recovering economy’s growth prospects. …The so-called “non-dom” programme will offer qualified wealthy investors who opt to shift their tax residence to the country a flat tax of 100,000 euros ($110,710) on global incomes earned outside Greece annually. “The tax incentive will run for a duration of up to 15 years and will include the benefit of no inheritance tax for assets outside Greece,” a senior government official told Reuters. One of the requirements to qualify will be residing in Greece for at least 183 days per year and making an investment of at least 500,000 euros within three years. …Investments of 3 million euros will reduce the flat tax to just 25,000 euros. There will also be a grandfathering clause protecting investors from policy changes by future governments.

By the way, Greece isn’t simply offering a flat-rate tax to wealthy foreigners. It’s offering them a flat-amount tax.

In other words, because they simply pay a predetermined amount, their actual tax rate (at least for non-Greek income) shrinks as their income goes up.

And since tax rates matter, this policy is luring well-to-do foreigners to Greece.

But I want politicians to understand that if low tax rates are good for newcomers, those low rates also would be good for locals.

But here’s the bad news. Fiscal policy in Greece is terrible (ranked #158 for “size of government” out of 162 nations according to the latest edition of Economic Freedom of the World).

What’s especially depressing is that Greece’s score has actually declined ever since the fiscal crisis began about 10 years ago.

In other words, the country got in trouble because of too much government, and politicians responded by actually making fiscal policy worse (aided and abetted by the fiscal pyromaniacs at the IMF).

And the bottom line is that it’s impossible to have overall low tax rates with a bloated public sector – a lesson that applies in other nations, including the United States.