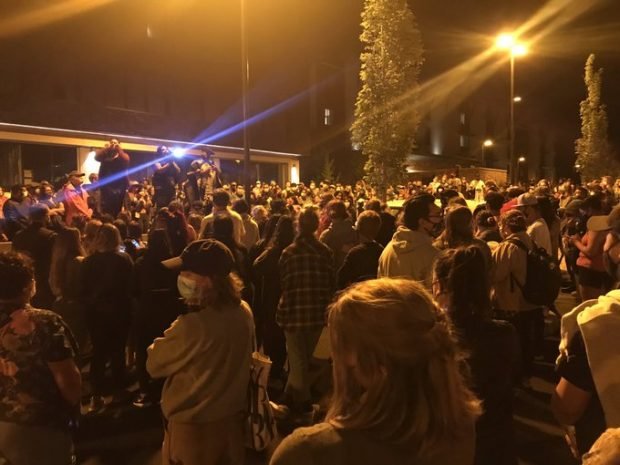 Demonstrators crowded two unmarked ICE buses for more than 10 hours after the agency arrested two men immigration officials said were a “threat to the public,” according to Fox News. An activist in Bend, which declared itself a sanctuary city, said that the motive of the protest was to impede the transport vehicles until warrants could be shown, KTVZ reported.

“If they’re going to take people from a sanctuary city, they need to have proper documentation of that,” Central Oregon Peacekeepers President Luke Richter, who blocked one of the two buses, told KTVZ. “We have not seen any warrants for their arrest.”

Federal agents arrived to quell the crowd and local police withdrew from the area, according to a tweet from Bend Police. Agents used pepper spray to disperse the gathering and eventually escorted the detainees and officers out of the buses, KTVZ reported.

The demonstrators cleared after the two men were removed from the vehicles, the local outlet wrote.

Deschutes County District Attorney John Hummel, who attended the demonstration, said he’s “never been so disgusted” by the actions of his government.

I’ve never been so disgusted by my government and so proud of my community.

Acting Deputy Secretary of Homeland Security Ken Cuccinelli said the duo that was arrested “had a history of criminal violent behavior” and ICE would prosecute anyone who put agents in harm’s way.

An Oregon Public Broadcasting reporter claimed someone wrote on one of the buses, which was later cleaned off, and demonstrators vowed to hold their ground and take a knee if ICE arrived on scene.

Organizers plead with people not to vandalize the busses. Earlier someone wrote ice on the unmarked bus, and someone else cleaned it off like new. Speakers saying now: if federal police come to disperse the crowd in bend tonight: “don’t leave… take a knee. Sit down” pic.twitter.com/UC3FTih2oz

A nonprofit law firm filed a complaint against the DHS and ICE following the clash, alleging the arrestees were denied legal counsel and were unjustly detained, according to a tweet from the Oregon Public Broadcasting reporter.