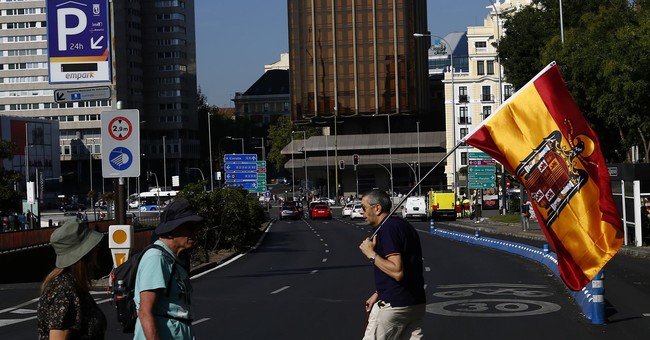 Early last decade, when writing about Spain’s fiscal crisis, I pointed out that the country got in trouble for the same reason Greece got in trouble.

Simply stated, government spending grew faster than the private economy. And when nations violate fiscal policy’s Golden Rule, that means a growing fiscal burden and – if maintained for a long-enough period of time – a recipe for chaos.

Spain managed to get past that crisis, thanks to indirect bailouts and some belated spending restraint.

But some politicians in the country didn’t learn from that experience. The nation now has a hard-left government that is going to test how long it takes to create another fiscal crisis.

And even establishment-oriented experts are worried. In an article last June for the Bulwark, Desmond Lachman and John Kearns warned that Spanish politicians were putting the nation in a precarious fiscal position.

Spain’s economy was painfully slow to recover from its 2008 economic recession, which saw its GDP drop by 4 percent. …Over the past decade, a major reason for Spain’s poor economic performance was its need to mend its public finances, which were seriously compromised by the collapse of its housing bubble… Spain’s coronavirus-induced recession could now make the 2008 housing market collapse look like a minor speed bump. …Spain’s GDP is projected to contract by almost 13 percent. As in 2008, Spanish public finances will be sure to suffer… the country’s public-debt-to-GDP ratio will by the end of this year jump to 120 percent—a level appreciably above its 2010 peak. …Another disturbing projection is the toll that the recession will take on its banking system… It does not inspire confidence that Spanish banks entered the present crisis with among the slimmest capital reserves in Europe.

At the risk of understatement, no sensible person should have confidence in any aspect of Spain’s economy, not just the banking system.

A few days ago, Daniel Raisbeck authored a column for Reason about the country’s downward spiral to statism.

The PSOE-Podemos coalition is not only Spain’s most left-wing government since the country restored democracy after dictator Francisco Franco’s death in 1975; currently, it’s also the most leftist government in the entire European Union (E.U.). As you would expect, this has brought about a barrage of progressive pet projects…a torrent of debt, public spending, and tax increases. …The government’s budget for 2021 also includes record levels of spending after the executive raised the ceiling on non-financial expenditures by over 50 percent. …The Spanish government has also taken advantage of the current crisis to impose drastic tax hikes. These include a “tax harmonization” scheme—a euphemism for getting rid of fiscal competition—that would end the freedom of autonomous communities, the largest political and administrative units in Spain, to set their own policies in terms of wealth, inheritance, and income taxes, the last of which consist of both a national and a regional rate.

Let’s now look at a few additional passages from the article.

One of the reasons I oppose fiscal centralization in Europe is that it will subsidize more bad policy. Which is now happening.

Spain’s spending spree will be subsidized with €140 billion ($172 billion) of E.U. money, part of a “recovery fund” agreed upon last July at an emergency summit in Brussels.

This is a lesson Spanish politicians already should have learned because of mistakes by the central government.

They also have evidence at the regional level. Catalonia has a bigger population than Madrid and imposes higher tax rates, but it collects less revenue.

…although Madrid…charges some of the country’s lowest rates for inheritance and income taxes, the region raises €900 million ($1.1 billion) more in taxes per year than the far more interventionist Catalonia according to economist José María Rotellar.

As you might expect, politicians in Catalonia grouse that Madrid’s lower tax rates are “fiscal dumping” and they argue in favor of tax harmonization.

…the Republican Left of Catalonia, the pro-Catalan independence party that allowed Sánchez to become president, recently accused Madrid of practicing “fiscal dumping.” …Isabel Díaz Ayuso, the Popular Party president of the Community of Madrid, stated that “if Catalonia wants fiscal harmonization, they should reduce their own taxes,” a reference to that region’s notoriously high taxation levels.

Let’s close by returning to the big-picture topic of whether it’s a good idea for Spain’s government to expand the nation’s fiscal burden.

The leftists politicians currently in charge make the usual class-warfare arguments about helping the poor and penalizing the rich. Whenever I hear that kind of nonsense, I’m reminded of this jaw-dropping story about how people with modest incomes are being strangled by statism.

Imagine only making €1000 per month and losing two-thirds of your income to government?!?

No wonder Spaniards come up with clever ways of lowering their tax burdens.

P.S. The current government of Spain may be naive (or malicious) about taxes, but there are some sensible economists at the country’s central bank who have written about the negative impact of higher tax rates.