NASA Makes History With First Helicopter Flight On Another Planet

The National Aeronautics and Space Administration made history Monday morning when it conducted the first ever powered and controlled flight on a different planet.

The National Aeronautics and Space Administration’s (NASA) Ingenuity, a solar-powered helicopter, took flight on Mars for more than 39 seconds, reaching a maximum altitude of 10 feet, the agency announced. Hours after the flight, NASA’s Jet Propulsion Laboratory in California confirmed the success after it received data sent from the helicopter.

“Ingenuity is the latest in a long and storied tradition of NASA projects achieving a space exploration goal once thought impossible,” acting NASA Administrator Steve Jurczyk said in a statement Monday.

“We don’t know exactly where Ingenuity will lead us, but today’s results indicate the sky – at least on Mars – may not be the limit,” he continued.

The U.S. space agency dubbed the area where Ingenuity took flight Wright Brothers Field, named after Orville and Wilbur Wright, the brothers credited with creating the first plane in the early 20th century. 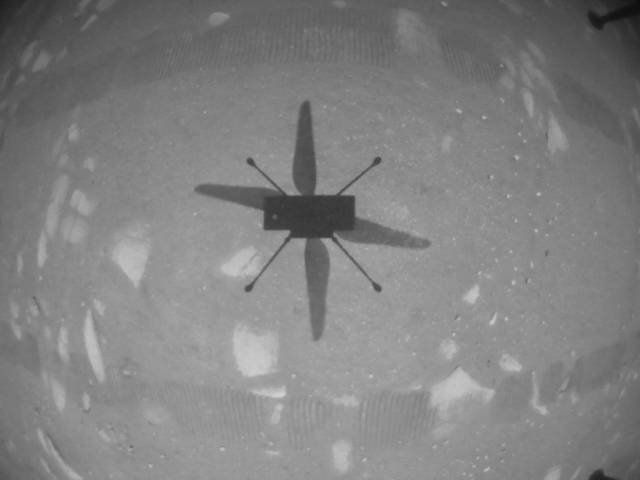 NASA’s Ingenuity Mars Helicopter captured this shot as it hovered over the Martian surface on Monday during the first instance of powered, controlled flight on another planet. (NASA/JPL-Caltech)

“Now, 117 years after the Wright brothers succeeded in making the first flight on our planet, NASA’s Ingenuity helicopter has succeeded in performing this amazing feat on another world,” NASA Associate Administrator for Science Thomas Zurbuchen said in a statement. “While these two iconic moments in aviation history may be separated by time and 173 million miles of space, they now will forever be linked.”

In February, the Perseverance rover carrying Ingenuity successfully completed its landing on the Red Planet after a nearly seven-month flight from Earth. NASA is using Perseverance, which is about the size of an automobile, to look for signs of ancient microbial life on Mars and investigate the planet’s rock and sediment to better understand the planet’s past climate, according to an announcement.

The mission is also focused on paving the way for eventual human exploration of the Red Planet, according to NASA. Previously, NASA set the 2030s as a goal for landing an astronaut on Mars, according to The Planetary Society.

The purpose of Ingenuity is to determine whether aerial exploration can be conducted on future missions.

NASA’s Sojourner became the first-ever rover to successfully land on Mars as part of the 1997 Pathfinder mission. The space agency landed the Spirit and Opportunity rovers on Mars in 2004, which aren’t operational anymore, and the Curiosity rover in 2012, which is still operational.