Not much attention has been given to the rather sudden pullback in the dollar index (DXY) this past week. This movement saw the world’s reserve currency shed 3%, which is large in the world of sovereign monies in the developed world. 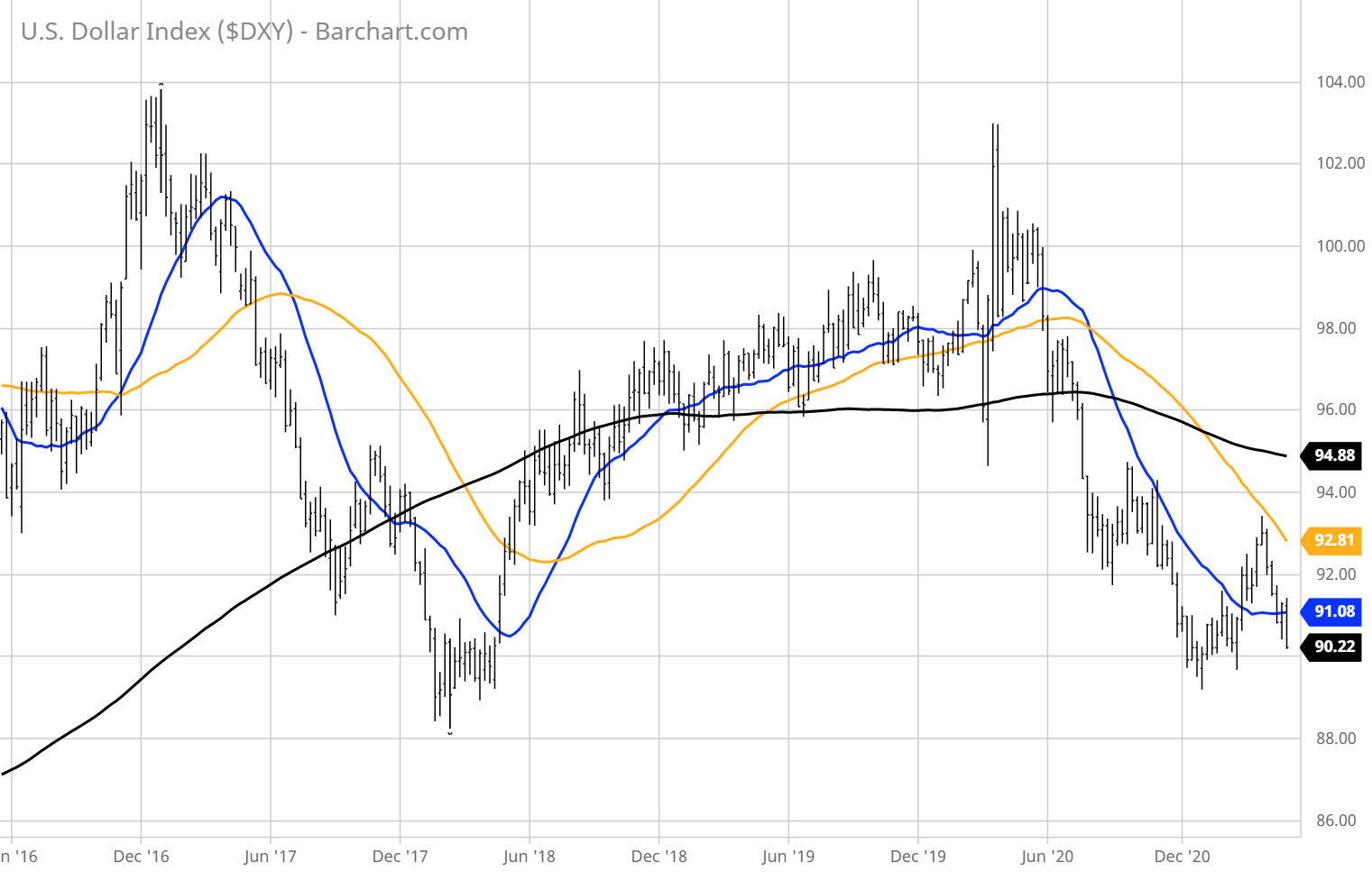 It has been long known that currency prices are moved by many factors, including supply and demand, politics, interest rates, speculation and economic growth. More specifically, since economic growth and exports are directly related to a country’s domestic industry, it is natural for some currencies to be heavily correlated with commodity prices.

Some foreign exchange market (FOREX) traders are attributing the greenback falling to the fact that commodity-linked currencies are outperforming their European rivals against the American dollar. Brazilian reals, Australian dollars and Canadian dollars are the most sensitive currencies to price swings in commodities.

The chart below is from the Commodity Research Bureau Index (CRB), and it shows a powerful move higher for commodity prices since early December. They are now trading at pre-pandemic levels. Global shortages of most hard and soft commodities are coming at a time when domestic and global economic growth is accelerating. In fact, it is looking anything but “transitory,” as the Fed would have it. 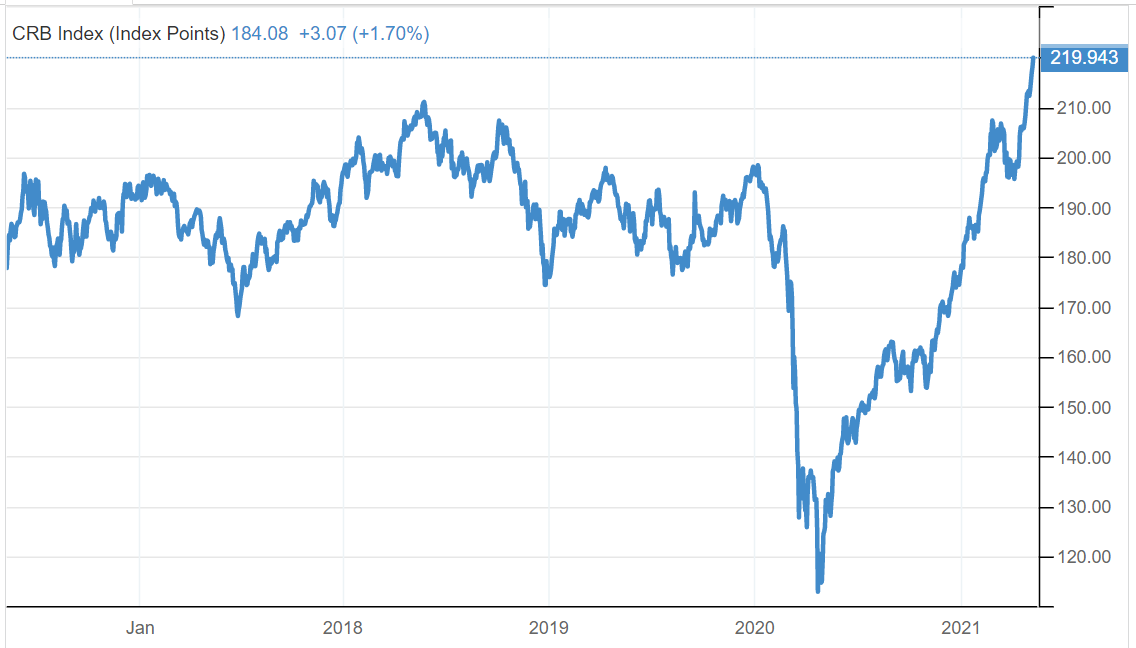 One of the main issues that is fueling the view that these upward price pressures are going to be sustained is that the historic amount of central bank and government stimulus could cause the economy to overheat in the second and third quarters of this year. First-quarter gross domestic product (GDP) came in at 6.4%, which is stellar when one considers that the pandemic didn’t impact the economy until March — two months into the quarter.

The current Atlanta Fed GDPNow model estimate is forecasting GDP growth of 13.6% for the second quarter of 2021. That is just stunning. The main takeaway is that the market isn’t buying the Fed’s narrative about transitory inflation, especially when mega-tech stocks fade on blowout earnings while financial, transportation, industrial, energy and materials stocks rally. 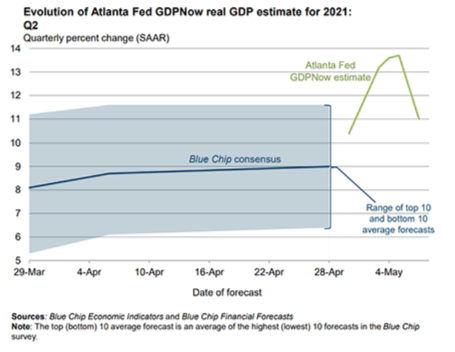 Even as the 10-year Treasury note has been trading between 1.50% and 1.60%, there has been a newfound reality check occurring over these past couple of weeks. It is sinking in that interest rates may start to rise again following the current pause.

It has been thought that the Fed will have to start a conversation about tapering its amount of quantitative easing, currently $120 billion per month, in the face of $5.7 trillion in current and proposed government spending by the Biden administration that will further fuel GDP expansion through 2021.

All this money pouring into the banking system and the economy is coming at a time when the data are rebounding at a strong clip. This scenario carries the risk of seeing bond yields pop higher, which could trigger a move in the 10-year Treasury note that would likely weigh on investor sentiment, which has become accustomed to ultra-low interest rates. However, until that upward move in rates happens, the path of least resistance for stocks is higher, as was the case last week following the jobs report.

Penn-Wharton has calculated that President Biden’s two proposals would spend $5.2 trillion and only raise $3.4 trillion in the first 10 years, putting him far short of his 15-year goal. Plus, these long-term government blueprints almost always get reworked or repealed outright when there are changes in which party controls Congress and the White House. The revenue numbers are highly speculative and have not been vetted by the Congressional Budget Office, whereas Congress can vote for spending big now with a simple Democrat majority.

The bond market will have a chance to vote up or down, as this week will bring a burst of supply, with the U.S. Treasury auctioning $58 billion of three-year notes on Tuesday, $41 billion of 10-year notes on Wednesday and $27 billion of 30-year bonds on Thursday. How the dollar trades against this heavy issuance will carry some psychological weight for both the bond and stock markets.

Due to surging GDP growth, spiking commodity prices and soaring debt load, king dollar is at a technical inflection point. The Federal Reserve has always had the power to step in to buy dollars to support the greenback. Any action taken by a central bank in the FOREX market is done to stabilize or increase the competitiveness of that nation’s economy. At the same time, it is sending a negative message that the Fed is buying dollars to offset fears of debt-related devaluation. I’m not sure that the Fed has a persuasive spin doctor for that scenario.

As a result of this set of circumstances, the best yields available to most investors are found in high-quality, multi-national stocks that pay more than the 30-year Treasury note, which is currently 2.28%. Qualified dividends in companies that are experiencing strong sales and earnings growth and rising dividend payouts are the sweet spot for income investors who want income and growth that exceeds inflation while taking full advantage of wider profit margins on exports from a weaker dollar.