Not Just a Voice of Protest 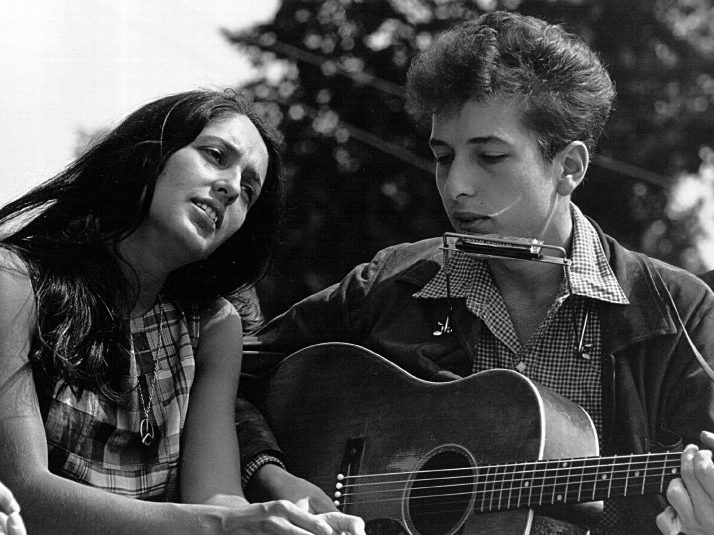 I remember exactly when I first heard Bob Dylan. I was living in a first-year dorm at the University of Virginia. The UVA radio station was on. As I walked out the door, I heard this: “So long, New York. Howdy, East Orange.” I’ve been a Dylan fan since that moment. It was 1963.

Dylan’s first album had come out a year earlier, but I’d never come across it. My favorites as I grew up were Ray Charles, Jimmy Reed, and Johnny Cash. I still like them, but once I learned the name of the guy I’d heard as I left my dorm room, he became not quite an obsession, but close.

In that first snip, he wasn’t even singing. He talked and played the guitar. The song, which he’d written, was “Talkin’ New York.” I still listen to it. Dylan was seen as a folk singer in those days. I heard him in person at Carnegie Hall in 1963, though it might have been 1964. It’s hard to remember that far back.

I’d never had much interest in the Newport Folk Festival. I got there in 1964 solely to hear Dylan. He was the star of the show. Pete Seeger introduced him. Dylan was followed by Odetta, a real folk singer, but the audience began to thin out after Dylan left the stage.

With Dylan, there’s a question that many people find hard to answer: Why is he so appealing? He doesn’t have a memorable voice. He’s not a great guitarist. He’s not particularly charismatic. But what’s overwhelming is that they’ve never heard anyone like him before. That was my first reaction. Decades later, it hasn’t changed.

This might be a stretch, but Dylan strikes me as like a few politicians I’ve known. They’re not heartthrobs or presidential material. They seem to be wise and serious and ambitious.

Dylan is also witty. One of his lines in “Talkin’ New York” is about seeking to perform at a coffeehouse. He isn’t hired. “You sound like a hillbilly,” the owner says, “we want folk singers here.”

There’s a final question to deal with before I turn to reviewing Clinton Heylin’s impressively reported book, The Double Life of Bob Dylan, covering his career in the early 1960s as he emerges as a superstar.

How could a conservative, like myself, fall head over heels for Dylan, who specializes in left-wing protest songs? It’s true he also wrote and sings Christian songs, but they don’t dominate his concerts the way some of his leftie songs do.

Dylan, however, is not primarily a protester with a political message. He sings far more about freedom, sorrow, and love than politics. For me anyway, themes of protest fade when I listen to “A Hard Rain’s A-Gonna Fall” or “Blowin’ in the Wind.” Heylin, by the way, disputes Dylan’s explanation in “Only a Pawn in Their Game” of how the murder of civil rights leader Medgar Evers came about.

For his part, Dylan hates to be labeled or typecast. I don’t blame him. “I’m not writing Folk Songs, Protest Songs, Freedom Songs or any other category,” he told Boston Broadside. “I have things that just have to be said. People can judge my songs in whatever way they want and get out of them whatever they see in them.… But these are just the thoughts that are honest and real to me.”

But that’s a poor excuse for “Masters of War,” a regular on the Dylan playlist. The crowd at concerts I’ve been to goes wild as if Dylan’s greatest song has arrived. In truth, it’s his most crude and pitiless.

While Heylin doesn’t seem to mind this song, he finds plenty about Dylan worthy of complaint. Dylan makes life difficult for everyone at recording sessions. He balks at leaving mikes in the position his advisers choose. He thinks he knows better, and maybe he does.

Anyone interested in Dylan’s love life won’t be disappointed by Heylin. The tales of romance with Suze Rotolo are endless. He was unhappy when she was traveling in Europe.

But the stories about him and Joan Baez are sad. Baez went out of her way to promote his career, bringing him on stage with her. Heylin leaves the impression Dylan not only didn’t reciprocate, he criticized her sharply. For example:

The night before the Baez sisters were due to depart, suddenly Dylan began laying into Joan about her appearance and he would not let up. No one quite knew where that person came from, unless he crawled out of the second bottle of Beaujolais, but the result was predictable: Joan in tears.

Dylan has many friends, and Heylin appears to have quoted nearly all of them. Baez was frank. Dylan “was rarely tender, and seldom reached out to anticipate another’s needs, though occasionally he would exhibit a sudden concern for another outlaw, hitch hiker, or bum,” she said.

Not that anyone asked, but here are my 10 favorite Dylan songs: “Pretty Peggy-O,” “Bob Dylan’s Dream,” “Mr. Tambourine Man,” “Walls of Red Wing,” “My Back Pages,” “Love Minus Zero/No Limit,” “Every Grain of Sand,” “A Hard Rain’s A-Gonna Fall,” “Chimes of Freedom,” “The Lonesome Death of Hattie Carroll.”

Fred Barnes retired recently after a half century in Washington journalism. His wife Barbara’s favorite Dylan song is “Highway 61 Revisited.” They live in Alexandria, Va.